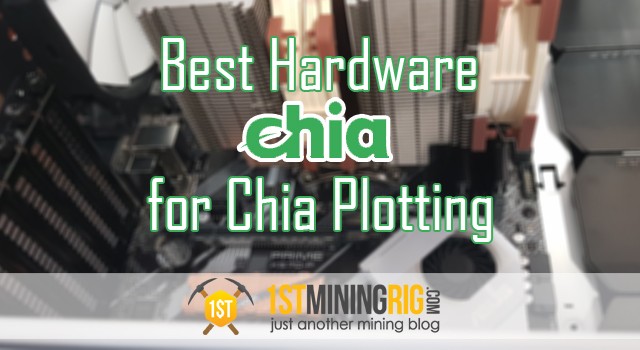 There are a lot of misconceptions about Chia plotting and farming. If you’d like to start farming Chia but don’t have the time to dig through forums and guides, you’ve come to the right place. Hopefully, this guide will help you avoid the trial and error I had to go through.

Today, we’ll be talking about Chia plotting, and specifically, which hardware to use to get the best return on investment. In this guide, I will explore both budget and high-end setups. Choose which one suits you the best.

Most Chia guides will tell you to simply grab a hard drive, launch the Chia plotter and call it a day. While this approach works, it’s far from being efficient.

Why should you care about efficiency, though? According to official sources, we reached a total of one million active plots. That’s a lot of competition, and if you want to earn any profit of Chia farming, you have to get a good rig for the least money possible. It’s all about knowing which corners to cut, and which ones to not.

Plotting and farming are two different processes that put load on different parts of your Chia hardware:

Based on my own experience, as well as on what the community says, the best setup is to have one PC dedicated to Chia plotting, and another one (or more) for Chia farming. This way, you get good plotting speed while avoiding over-investing on several high-end PCs. However, it’s still possible to combine both plotting and farming on the same PC, as long as you have the proper storage setup, below you will find the best cases i could found to store lots of HDDs depending of how much you would like to invest.

Now, most people I know use the SWAR plotter, and try to run as many plots in parallel as possible. The average speed for most people seems to be 8 plots every 7-12 hours. I personally now use the MadMAx43v3r Chia Plotter instead that does serial plotting. With it, I can achieve speeds between to 25 and 30 minutes per plot. This guide will show you the hardware I’m using for that.

For plotting, you’d ideally want to have a:

Here is my plotting PC. I already had it built for another project (LINK#1, LINK#2)

Below, you will notice that the only two things that change between the budget and high-end versions are the CPU and RAM specifications. The PSU, motherboard and system SSD are the exact same for both lists, which means that there is always the option to upgrade your rig afterwards if you start with the budget version.

What also varies besides the CPU and RAM is the amount and type of plotting SSDs to use in the rig. I will be detailing which model and capacity to pick, too.

This setup is both affordable and upgradeable. It’s a good way to getting started in Chia plotting without over investing.

As a rule of thumb, more threads let your rig work on more plots in parallel for the SWAR plotter. Since we will be running the madMAx43v3r plotter instead, the AMD Ryzen 3700X lets us run one instance of it at a time for an average of 50 minutes per plot.

The ASRock X570 is a great all-around motherboard that works for both plotting and farming. Here are the reasons I picked it over any other. The ASRock X570 has:

For the money, you are getting a gold certified PSU that has great quality and efficiency. The gold rating is especially important when you have the rig running 24/7. Another important feature is that this model comes with 6 SATA power connectors, as well as three MOLEX that can be connected to two extra SSD’s with the right adapters.

This humble consumer-grade 250GB SSD is meant to run the system and host the plotting software. When it comes to plotter SSDs, there are plenty of options, and I detail them below.

This is arguably the best setup you can get at home. What’s nice is that it’s still a consumer-grade PC, meaning you can later use it for purposes other than mining Chia.

The AMD Ryzen 3950X lets a rig run up to 8 plots in parallel with the SWAR plotter, or two instances of the madMAx43v3r plotter at a time to achieve around 30 minutes per plot goal.

Part 2/3: Choosing the SSD for plotting

The drives you will be using for Chia plotting will depend on what kind of CPU do you go for. Obviously, you want the SSD speed to match that of the CPU to avoid any bottlenecking.

This model maintains its writing speed thorough the entire plotting process thanks to its MLC NAND. Because of this, it is the fastest drive on this list. It also features an over the top 1200 TBW, which should be enough to create at least 900 plots. Use this drive for the second temporary folder (as detailed below).

This model is about cheaper 30% than the previous one. It features 600 TBW, and a slightly slower writing speed, though it still ranks among one of the fastest SSDs for Chia plotting.

This model still features the same 600 TBW, and write speeds that hover around 1400 MB/s when plotting. This gives you plenty of headroom without breaking the bank.

The slowest of the list, the SN750 is also the cheapest. Coming at 600 TBW, it is probably the best budget option for Chia plotting you can find.

Last but not least, this Sabrent SSD is a quality drive with solid 1,400 TBW endurance, as well as great performance. It’s also the most expensive drive on this list. You might have heard people complain about it but I personally had no issues with these drives so far.

The Plotripper is an upcoming model announced by Sabrent designed specifically for Chia plotting. Its selling points are insane TBW capacity, as well as allegedly reasonable pricing. We still have to wait to see the real numbers, though.

That was the selection of the drives I personally find the best for plotting. If you want to get something else, here are the main key aspects to consider:

You probably noticed that my list includes only 1TB SSD drives, even though 2TB seems to be the popular choice nowadays. I’m basing this recommendation off my own tests. Here’s what I found out:

The madMAx43v3r plotter uses two different temporary directories while plotting, and a final directory where the completed plot is stored. I will go over the specifics in my Plotting guide but for now I will say that you really want to split the three directories on three separate drives to achieve the best performance:

As you can see, you can get away with one expensive, and one less expensive SSD for your plotting drives. You also don’t have to waste money on 2TB SSD’s since the plotter won’t use the extra space anyway.

Now, a common counterargument is that 2TB drives have higher TBW than 1TB ones. While true, let’s not forget that the real TBW of SSD drives is often higher than the one advertised. A good example is my WD_Black SN750 1Tb drive that has 77% of its advertised TBW value used but is still sitting at 54% health.

Besides, it’s better to buy one high-end 1TB SSD with high TBW (such as the Samsung 970 PRO 1TB) than a mid-end 2TB drive. With the high end-drive, not only you get the same TBW, you also get better and more stable write speed.

I personally find Fractal Design Define R5 case perfect. It’s big enough to fit everything in it: it features 8x slots for 3.5 HHDs, and you can install up to 6 fans on it. It already comes with two. If you want to add more, I would recommend these: Fractal Design Dynamic X2 GP-14 Computer Fan – Silent Fan – High Airflow

If you are taking Chia farming very seriously, the Fractal Define 7 XL might be a better choice for you. For the money, you get room for up to 20 (!!) 3.5 HDDs. You simply can’t beat this for the money. Just don’t forget to install enough additional fans to keep the whole system cool.

Price Disclaimer
NOTE: I have selected this two specific cases because once you finish plotting you can turn your plotting pc to a farming pc as well, so any of these cases are perfect to get started even if you choose to create a mid budget or high end plotting pc. I personaly got the Define 7 XL 🙂

Since the motherboard has only 8 SATA ports that means you can store 8 3.5 HDDs only, just perfect for Fractal Define 5, as for the Fractal Define 7 XL we will need few more parts and accessories in order to fill up the case with 12 more 3.5 HDDs. Here is the list:

2 pairs are needed in case you go with the LSI MegaRAID SAS/SATA controller board.

If you go with the Fractal Define 5 most probably you will not need just one SATA splitter (if using PSU recommende by me), but if you go for Fractal Define 7 XL you will need 4x splitters for sure.

8x cables in total is what you need no matter which case you choose betweed Define 5 and 7.

How to Plot and Farm Chia

Now that you have your plotting rig ready, it’s time to get started with the actual plotting. Below, you will find my Farming Rig Setup guide, as well as my full Plotting Guide:

Please share your feedback in the comments below. Thanks!